[GIVEAWAY] Retiring our @ergobaby, introducing the

TIPS ON TRAVELING WITH A CAR SEAT (ONCE IT’S SAF

BACK TO THE BEGINNING: The girls ages on their fir

#BabyDovePartner I know everyone's day to day has

AD: While the world is on hold right now and we're

If only we could just walk away from this pandemic

Living in Miami we frequently visit Orlando which often includes a trip to Disney World. However, we’ve never gone to any of their special events until this year when we were invited to experience Mickey’s Not So Scary Halloween Party. We’ve written about why you should take your toddler to Disney World, tips for a pleasant Disney trip, and how to plan a budget Disney trip. Now here are our 8 reasons to go to Mickey’s Not So Scary Halloween Party and what to expect on your visit. 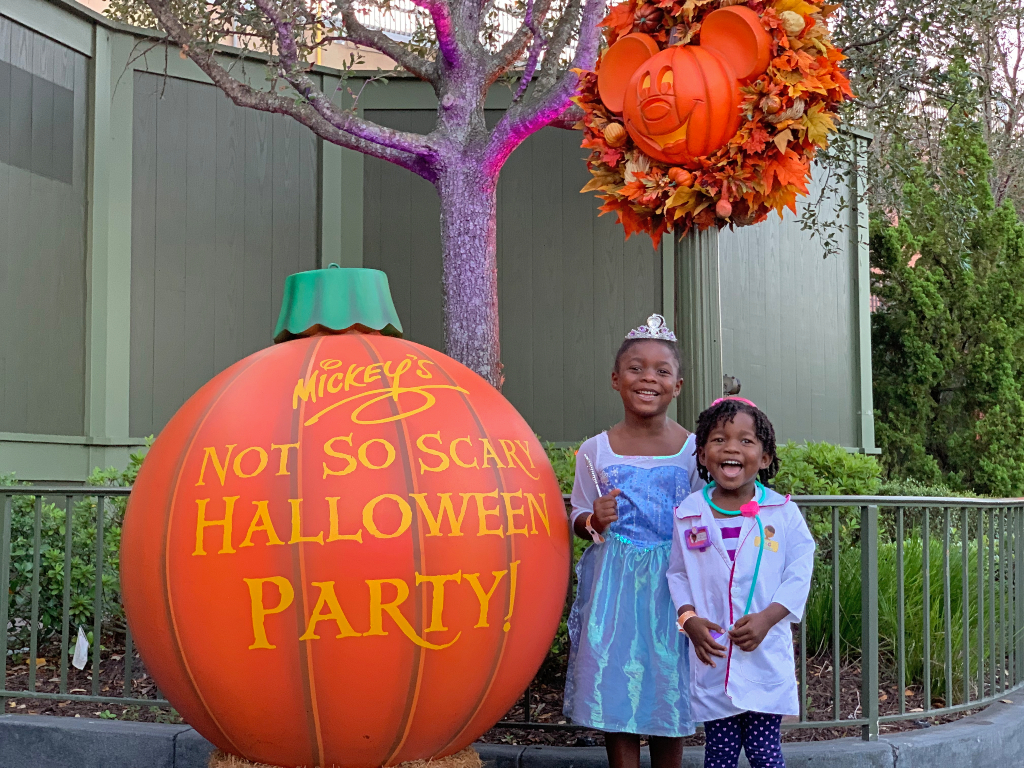 Halloween With the Disney Touch

If you love Halloween and Disney you’ll love Mickey’s Not So Scary Halloween Party. The park is decorated for fall and there are so many little touches to bring the Halloween spirit alive. As the name says it’s also not scary. So if you have little ones they can have all the joys of dressing up and trick or treating at their favorite place without being scared. There are no employees popping out or chasing you with fake chainsaws. A lot of the rides also have special Halloween twists including the Mad Tea Party, Space Mountain and Pirates of the Caribbean. 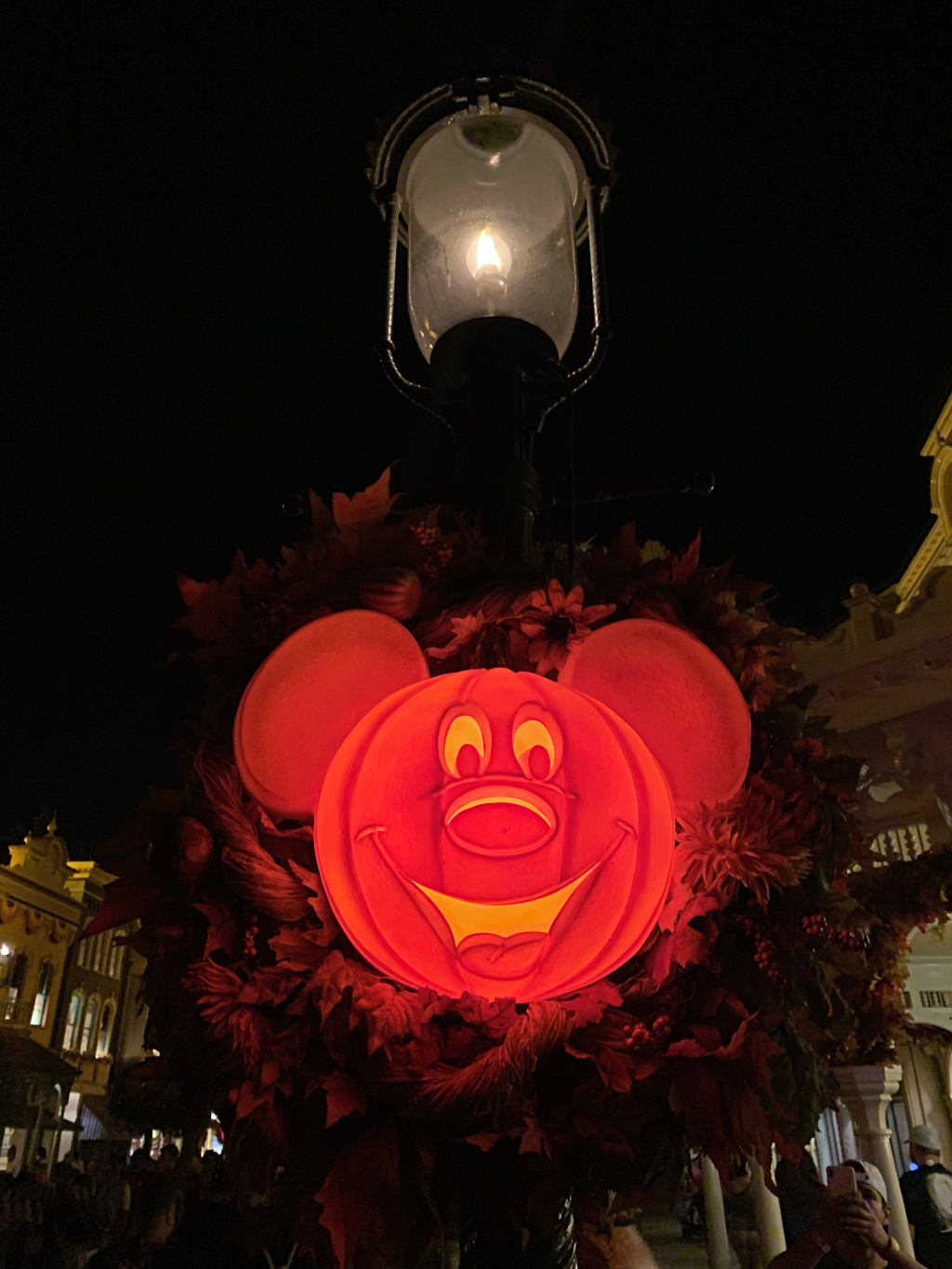 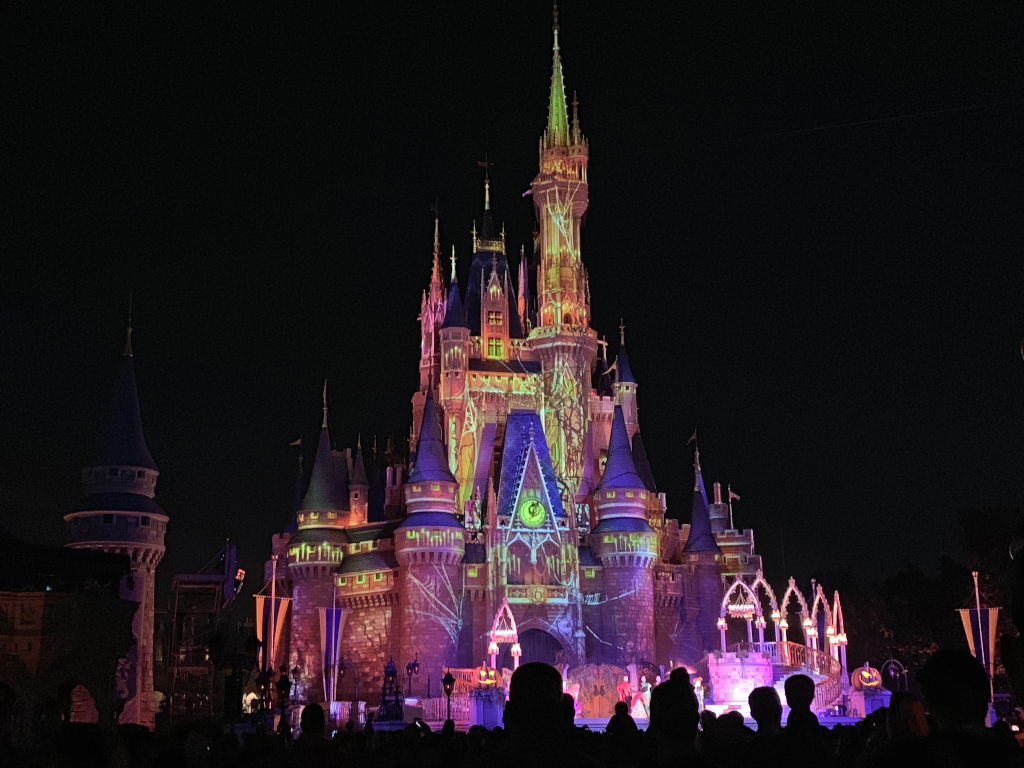 Disney cuts zero corners when it comes to playing out the theme of their events. Many of the restaurants offered Halloween themed menu items and there were plenty of desserts. From Headless Horseman cheesecakes to Pumpkin Spice milkshakes to Jack and Sully push pops the Halloween spirit can be found at many Disney restaurants and food stands.

Disney World is known for its crowds which often lead to long lines for the rides. We were pleasantly surprised to open up the My Experience App and find the wait times the shortest we’ve ever seen them. We later learned that Disney limits the amount of tickets sold for these special events. 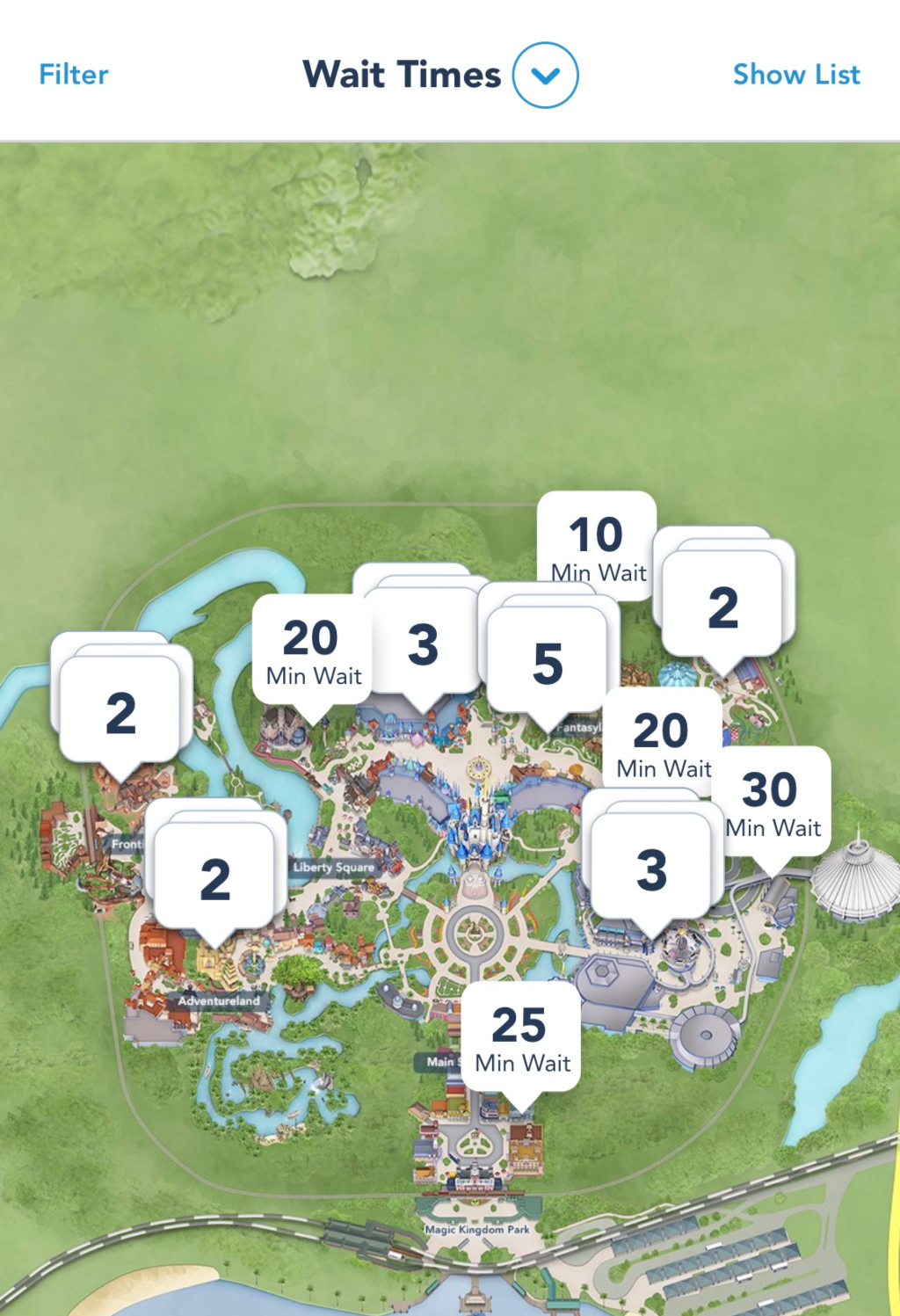 If you’re a Hocus Pocus fan you have to watch the Hocus Pocus Spelltacular Show. It’s such a hit and for good reasons. Disney does so many things well and they didn’t drop the ball here. I won’t ruin the show if you haven’t seen it but now if you love Hocus Pocus you will LOVE this show.

The Characters are Dressed in Special Attire

During Mickey’s Not So Scary Halloween Party the characters also take part wearing special Halloween costumes. Most of the lines to take pictures with the characters were quite lengthy, roughly 45 minutes wait. The girls decided to enjoy the DescenDANCE party instead of standing on line but still thought it was so cute and funny seeing their favorite characters dressed up.

I’ll be honest we normally skip the parades on our Disney visits and enjoy the rides instead. However, my girls love Halloween so I wanted them to get the full experience at Mickey’s Not So Scary Halloween Party. I’m so happy we didn’t skip it, below are a few snippets from the parade. If you want a seat up front plan to head to the parade location at least 30 minutes ahead of the start time.

Florida is hot, even in the winter and summer days at Disney can be brutal. Still if you attend Mickey’s Not So Scary Halloween Party in August you’ll beat the heat if you don’t do Disney during the day. Even if you take advantage of the early entry time the sun won’t be beaming down on you as much as it is from 10AM-3PM.

Let’s be honest even big kids a.k.a adults get excited about candy. Well Mickey’s Not So Scary Halloween Party is filled with  candy stations where you can fill up your own bag or one of the bags provided by Disney. There’s no limit to the amount of candy you can get so go back on line as many times as you’d like. A lot of the rides gave candy right before you got on or right after you got off as well. 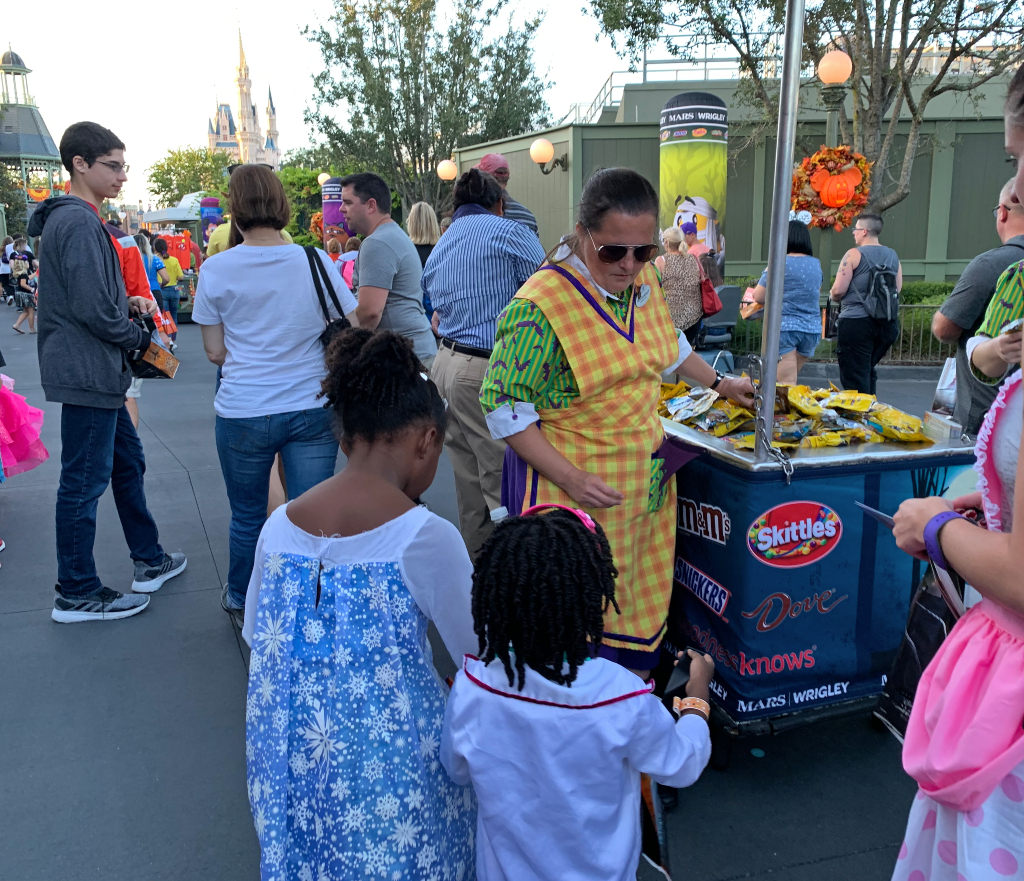 When Can You Experience Mickey’s Not So Scary Halloween Party?

Although Halloween is not until October 31st, Disney kicks off the celebration quite early, starting in August, this year (2019) August 16th. However, the party is not every night so be sure to plan accordingly. We attended the September 20th party and as of that date these were the remaining dates were:

Like all tickets at Disney World pricing varies based on the date you attend. Prices for Mickey’s Not So Scary Halloween Party start at $79, but go up to $135 per ticket like it costs on Halloween itself. The earlier in the season you go like August and September, the cheaper the ticket costs $85 per adult. Once you hit October you can expect to pay no less than $105 per adult, saving $5 on kids tickets.

Mickey’s Not So Scary Halloween Party lasts from 7pm-12am. Still with your special event ticket you are able to enter the park at 4pm, giving you an additional 3 hours of Disney fun. Just know the Halloween themes won’t kick off until 7pm. On these days the park closes at 6pm for guests that didn’t purchase the special event ticket so you’ll technically have an hour of time with even more limited guests.

Understand There are No Fast Passes

Disney only sells a limited amount of tickets for Mickey’s Not So Scary Halloween Party. This means there are no fast passes once the party starts at 7pm. Honestly with the low wait times there really isn’t a need for them. Even Space Mountain and Splash Mountain had max wait times of 30 minutes while we were there, a far cry from the often 90-120 wait times on regular days. However, if you take advantage of the 4pm entry time you can get fast passes until 7pm.

Normally Disney does not allow guests over the age of 14 to dress up when visiting the park. However, during special events they bend the rules so kids of all ages can have fun. Still there are specific rules for those who want to dress up. Make sure you follow the below rules (directly from Disney’s website) so you aren’t denied entrance. 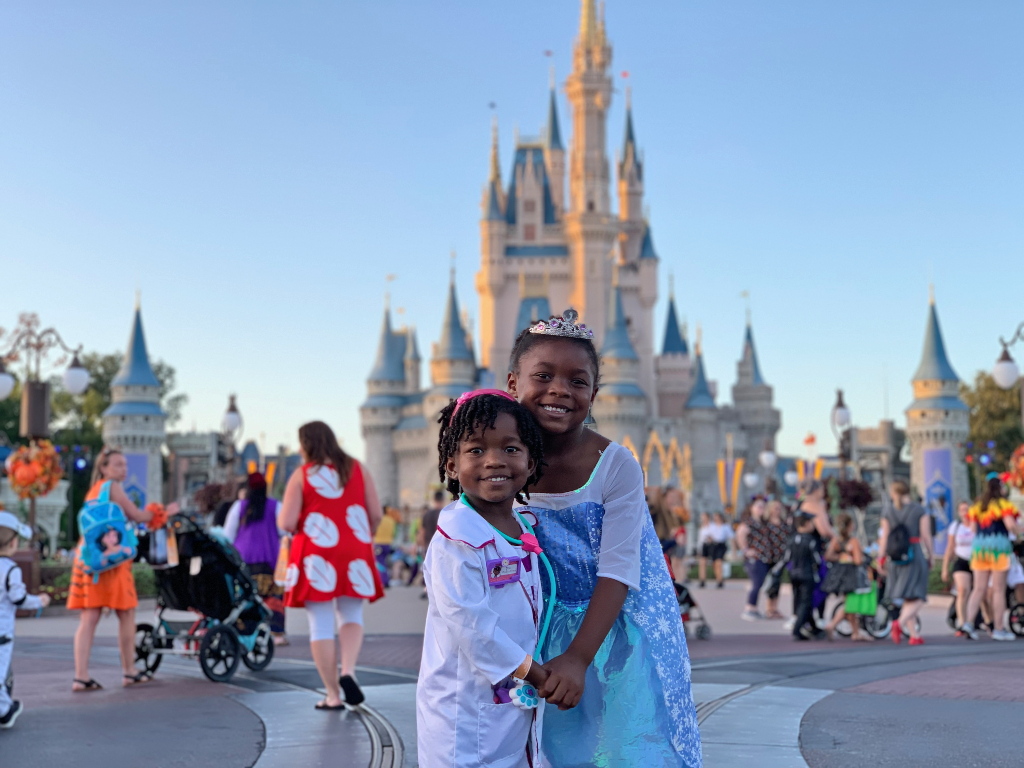 For Guests ages 13 and under:

For Guests ages 14 and older:

We had a great time experiencing Mickey’s Not So Scary Halloween Party. If you’ll be in Orlando for an extended period of time here are some things to do besides theme parks. We personally love staying at the Holiday Inn Vacations Club at Orange Lake. It’s only 15 minutes from Magic Kingdom and you can read our full review here.  Another option is  Margaritaville Resort Orlando, which is in the same area and has a waterpark on site. Did you find this post helpful? Please share it!