MANIFEST YOUR TRAVEL GOALS! I’m so excited to an

KIDS SAIL FREE CRUISE SALE GOING ON NOW! (save and

[AD] THINGS TO DO IN PUERTO RICO (save this post):

[AD] INVEST IN AND TREAT YOURSELF! This month I we

Thailand has been a dream of ours but many people said it was too exotic to bring kids. Of course, we didn’t listen and we are glad we didn’t. We planned a one week trip to Thailand, a multi-city tour visiting Phuket, Bangkok and Chiang Mai. Here’s how to spend 3 days in Phuket with kids (or without)! 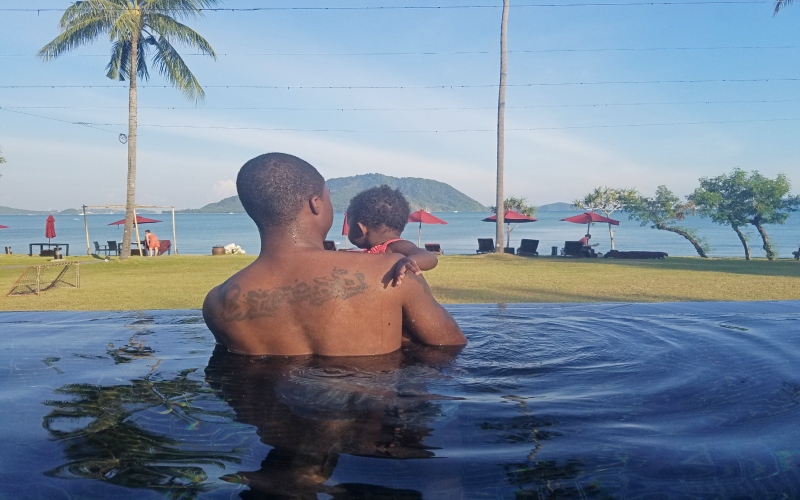 How to Get to Phuket with Kids

When flying from the United States flights directly to Phuket can be quite expensive. We avoided this by getting a flight deal to a country that has cheap flights to Phuket. We found an amazing deal on Skyscanner for flights from Miami to Singapore on Qatar Airways for $400RT per person. From Singapore to Phuket was less than a 2hr flight and flights were as low as $40. Plus we got an extended layover in Singapore and were able to explore the city. You can download the free Skyscanner app here.

We arranged our Phuket airport transfer with Easy Day Thailand. If you’re traveling to Phuket with kids they are perfect as they provided a car seat for both our infant and toddler. It was a private transfer and cost 1300 baht.

Where We Stayed in Phuket with Kids

There are so many choices on where to stay in Phuket. After much research we chose The Vijitt Resort Phuket in Rawai Beach. The resort was gorgeous!! It was in a quiet area and had great amenities. Breakfast was included, served from 6AM-10AM and included a buffet plus made to order items like eggs and pancakes. We splurged a bit since we saved so much on the airfare and got a villa with a private pool. Our girls enjoyed it but the resort’s pool is so nice we could have gotten a regular villa and saved money. 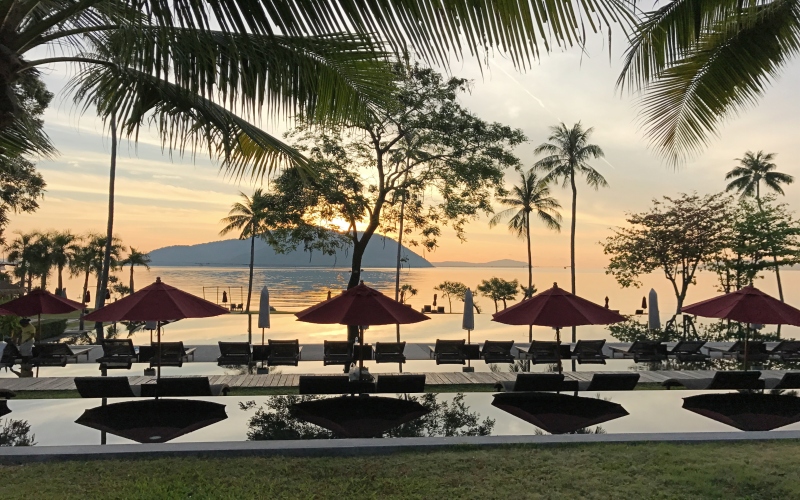 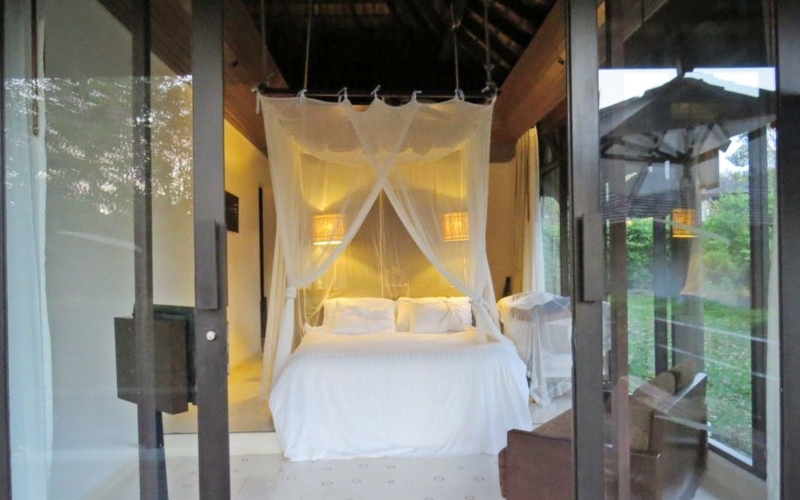 The Vijitt Resort is a great option for visiting Phuket with kids with to the amazing child amenities they offer. There is a kids club with a kids pool and playground. They also offer thai boxing classes for the little ones. The hotel provided a baby cot for our infant with a mosquito net for it. They also provided baby soap, baby oil, baby lotion, and baby powder. The bathroom is equipped with a tub making it easy to bathe the little ones too. The on-sight restaurant had high-chairs and you could borrow sand castle toys, floaties, and other pool toys from the kids club. It’s definitely the best family resort in Phuket.

Things to Do in Phuket

We relaxed at our private pool in our villa recovering from our 24hrs of flying. In the evening we ventured to Chalong Pier and had dinner at Kan Eang overlooking the water. 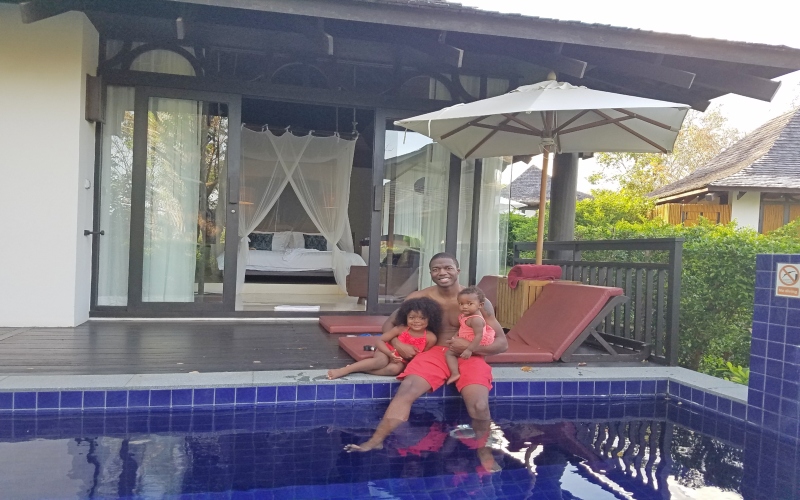 We went to Phuket and we didn’t go to Phi Phi Island!!! Why? Phi Phi Island is a 2hr ride from Phuket by speedboat. It’s hard to visit during monsoon season, May-Oct, due to rough seas. Even during the better weather months of Nov-April the ride can be a little bumpy and while some tour companies don’t recommend the trip for pregnant women or young children many flat out won’t allow them on their tours. We weren’t really interested in either of the kids becoming sick on such a long boat ride so we went to Coral Island and visited Banana Beach instead. It’s a quick 30min long tail boat ride from Rawaii Beach. You can get there whenever you want and negotiate the price of your ride. 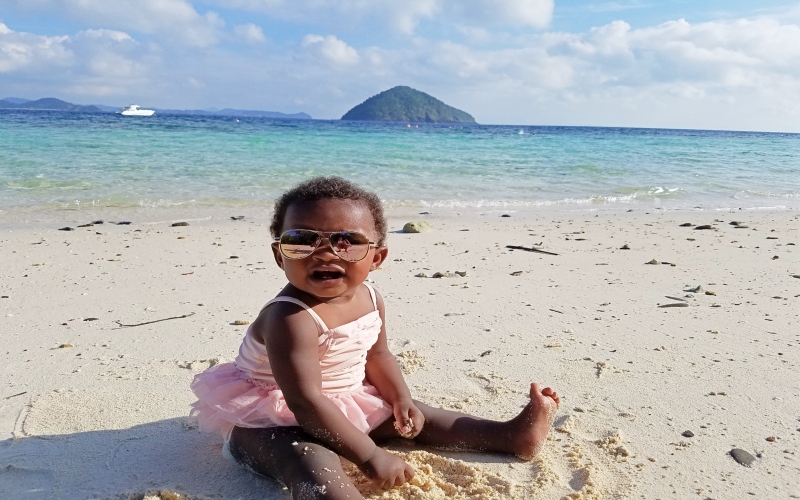 We were the first to arrive on the beach. At first, I was a bit disappointed by “Banana Beach”, there were a lot of rocks and the beach wasn’t the cleanest. They had signs for a viewpoint that we climbed up the hill to see but there was no view. About an hour after we got there other tourists started arriving by the boatloads and the beach got pretty crowded. Most people were there to snorkel. A major plus of the beach is there is tons to do, you can rent snorkeling gear, go scuba diving, paddle boarding, canoeing, etc. The water is very clear and we were able to see tons of colorful fish even without snorkel gear.

We left the beach around 11AM to head back to the hotel and explore the city. We hired a taxi for $500 baht per hour who took us to lunch, Chalong Temple, Old Phuket City, Patong Beach area, and the Karon Viewing Point. Old Phuket wasn’t much and when we got to Patong Beach I was so happy we didn’t stay there. It was a mix of South Beach during Spring Break and New Orleans during Mardi Gras, it was just so crowded I couldn’t imagine us having a good time there with the kids.
​ 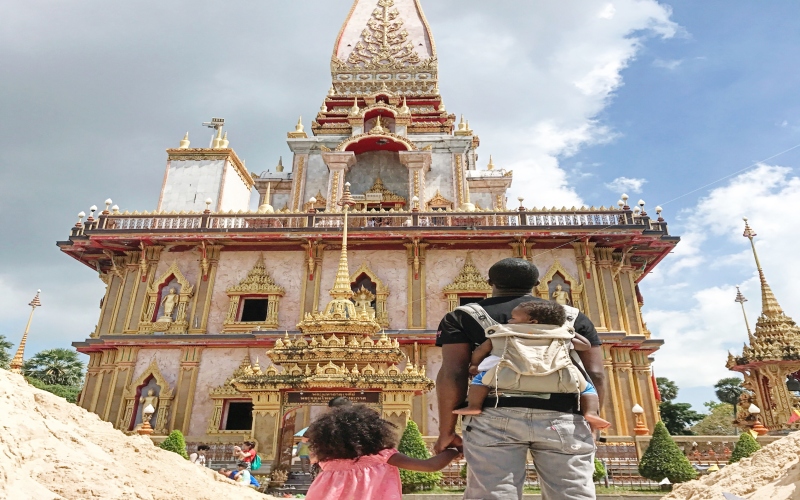 Both photos were taken at Wat Chalong Temple 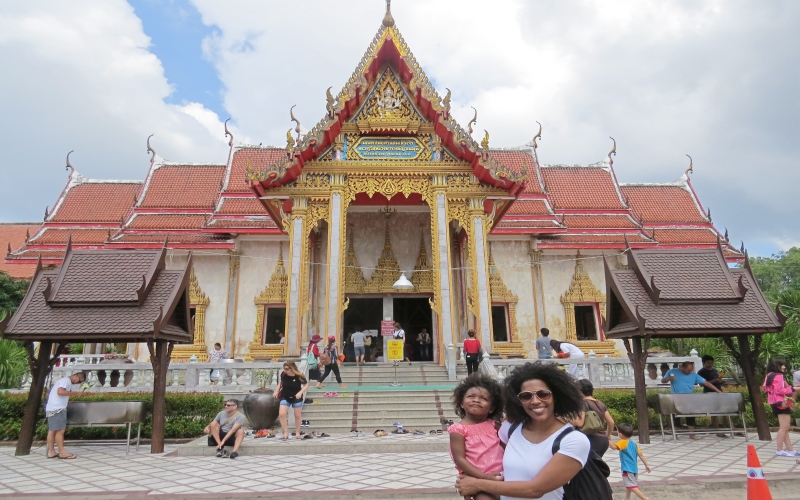 On the way to the Karon Viewing Point (pictured below), we got to see Karon beach which was very family friendly, tons of families walking around and about 6 playgrounds along the beach. 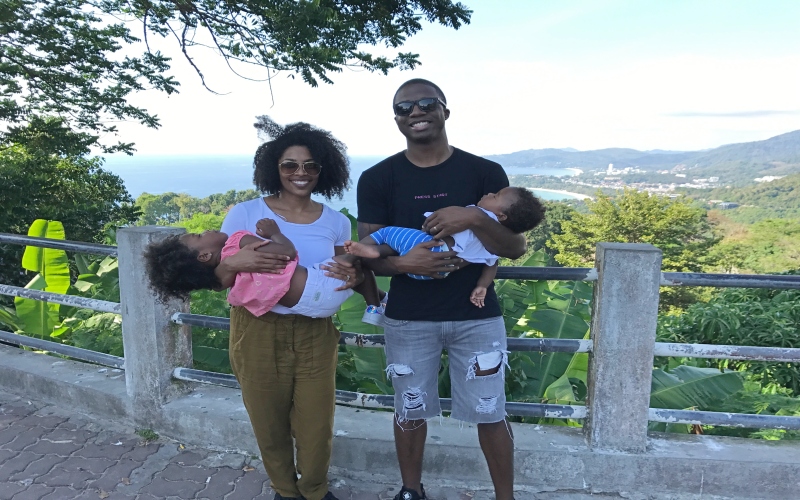 We did this tour through Easy Day Thailand. I chose them because instead of taking a long boat ride all the way to Phang Nga Bay they drove to the mainland and then we just took a quick long tail boat ride to visit James Bond Island. It was also fully customized private tour so we were able to add anything we wanted as well as skip whatever we wanted. As mentioned before I loved that they provide car seats at no additional charge and the van even had wifi. The vans are extremely spacious with the ability to seat 10 passengers and the seats recline which we were able to take advantage of since it was just us! We started the trip visiting Big Buddha arriving around 8AM. There were literally 3 other people there and it was so nice to experience this magnificent sculpture without the large crowds. There are two beautiful viewpoints and a smaller gold Buddha. 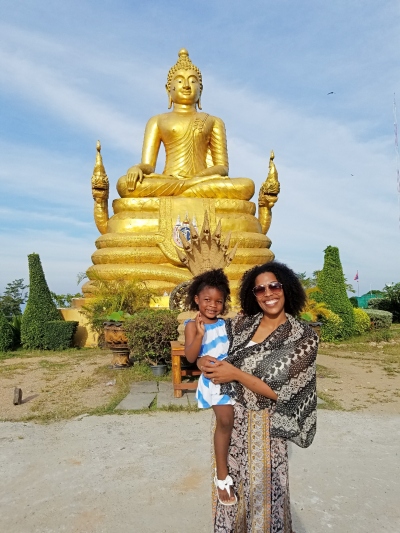 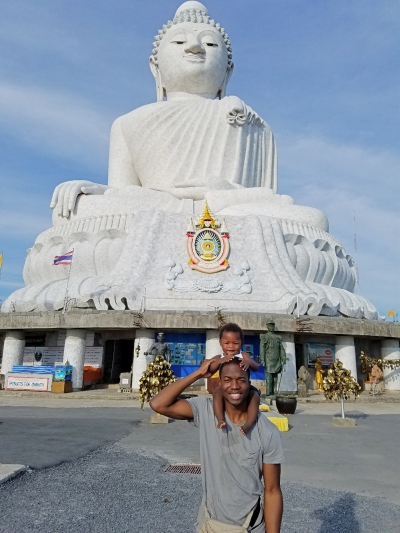 After visiting Big Buddha we traveled to the mainland. Our first stop was the Monkey Cave where there is a reclining Buddha, a few caves, and tons of wild monkeys waiting for tourists to feed them. Every vendor sells old bananas, corn, and seeds so you can attract the monkeys and give them some food and snap some pictures. We stayed here about an hour before heading to Phang Nga National Park. 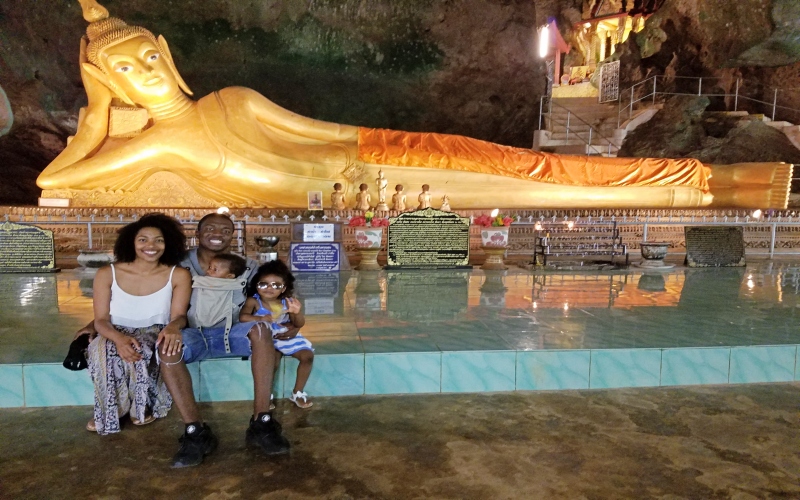 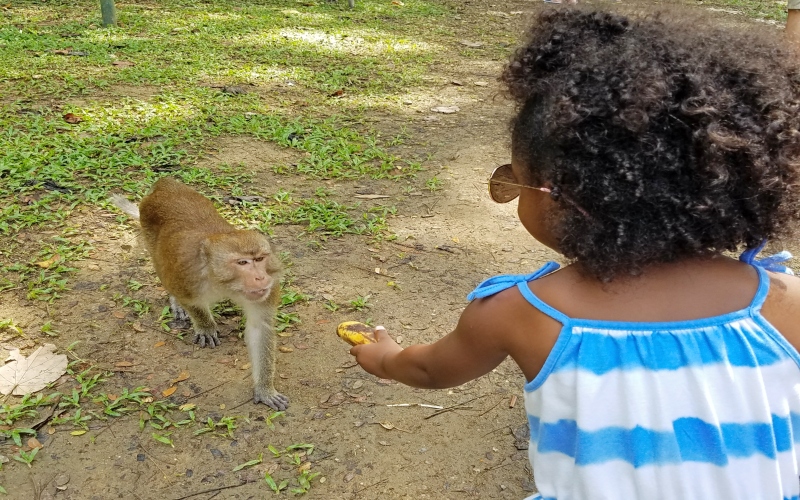 Lunch was included in our tour and we ate at a restaurant in the National Park along the canal. After lunch, we got in our private longtail boat and took a 30min ride to James Bond Island. The Island was packed and the vendors can be a bit aggressive but overall we still enjoyed the visit.

On the way back we stopped at the Muslim village on stilts and walked around. We had already decided we didn’t want to do the nearby canoeing and when we saw how crowded it was I was so glad we made that decision. The operators are the ones who actually paddle so that’s a plus but the sun was so hot the last thing I wanted to do was be canoeing with no shade and being packed like sardines on the floating dock while we waited our turn. When we left Phang Nga National Park Easy Day Thailand dropped us to the airport so we could catch our flight to Chiang Mai. 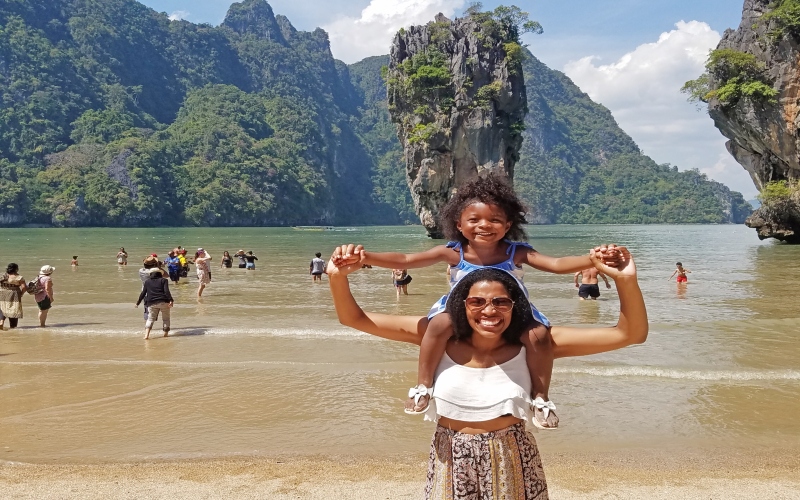 Easy Day Thailand provided both a driver and a tour guide. The driver was always with the van which was nice to know as we had our luggage stored in it.

We had Papootip as a guide and she was excellent. She was so helpful with Jordyn and the two of them def became friends. We paid a little more than some of the other tours offered but the ability to customize what we did was important. Avoiding a bus with 40 other people and the ability to move at our pace was worth the extra money. The company does not charge for kids 4 and under which was a major plus!

We enjoyed our 3 days in Phuket but if we go back I would love to stay on a different island. This is because the nice beaches are still a bit of a trek from Phuket. It would have been nice to wake up and be on the beautiful beaches rather than having to take a 2hr boat ride.

After spending 3 days in Phuket with kids we headed to spend 48 hours in Chiang Mai. Did you find this article helpful? Please share it!