#CVSPartner Before every trip you’ll most likely

Me looking for things to do in Miami with the girl

#ad While we’d all like to think nothing could e

After spending two amazing days exploring Chefchaouen (read that itinerary here) we made it to Fes. We spent three nights and two days here before ending our two weeks in Morocco visiting the Sahara Desert and Marrakech. Here are the top things to do in Fes and other parts of our itinerary including where we stayed and how to get to Fes from other parts of Morocco. 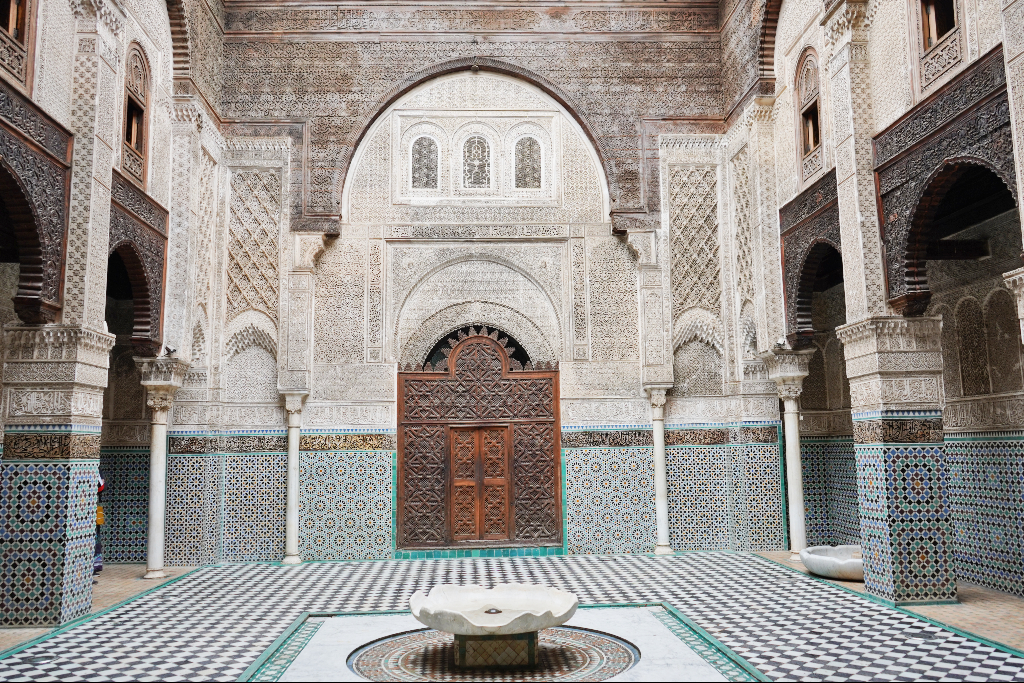 Things to Do in Fes Inside the Medina

Unfortunately the palace is not open to the public, however, just seeing it from the outdoors is satisfying. The huge 7 doors that line the building are gold and beautifully designed. While the King doesn’t live here, it is where he and his family stay when they are in Fes. If you don’t want to fight to get a picture along in front of the doors arrive early! 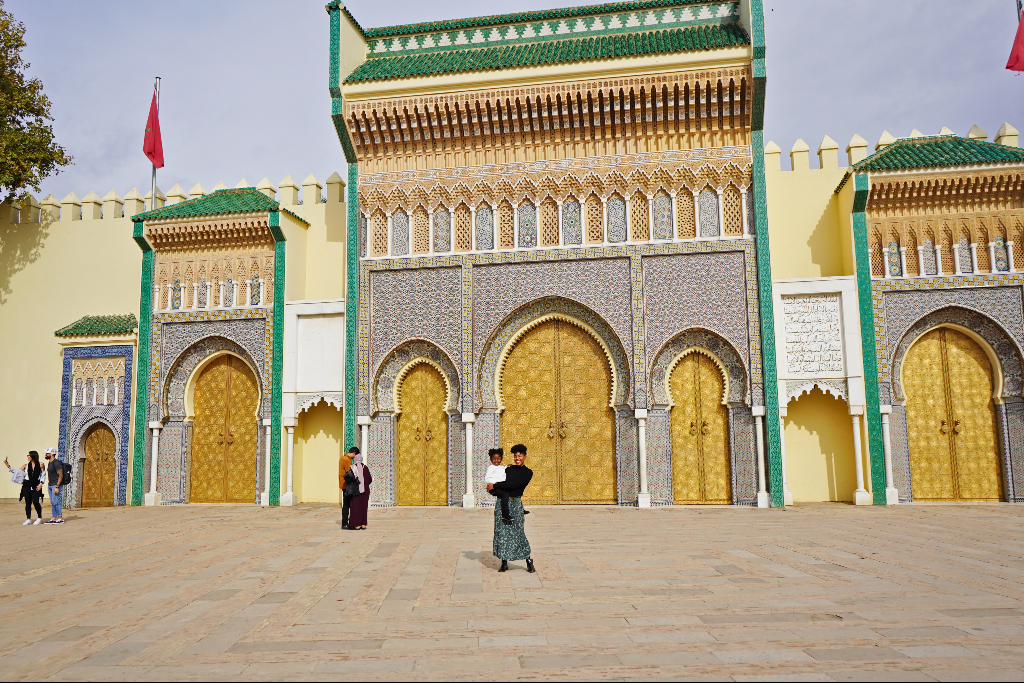 The Mellah is the old Jewish quarters in Fes. It was purposely located near the Kings Palace for protection as most Muslims were against the Jewish people residing in their community. However, they played a vital role in the local economy so the Kind wanted them protected. The two communities were separated by a gate. While exploring the Mellah we stepped into the Aben Danan Synagogue.

Walk Through the Medina and Find Rainbow Street

Like all cities in Morocco walking through the Medina is a big draw. That’s because you can see every and anything. From the vendors creating their products right in front of your eyes, the hustle of negotiations, to the smells of the various spices and foods it’s like no other place. You can easily get entranced by it all (or get lost) and spend hours walking around. One street tourists love is Rainbow Street. Not as bright as many of the pictures I saw of it online but it made my three year old happy. Don’t want to get lost trying to find it? Here’s the exact location via Google Maps. 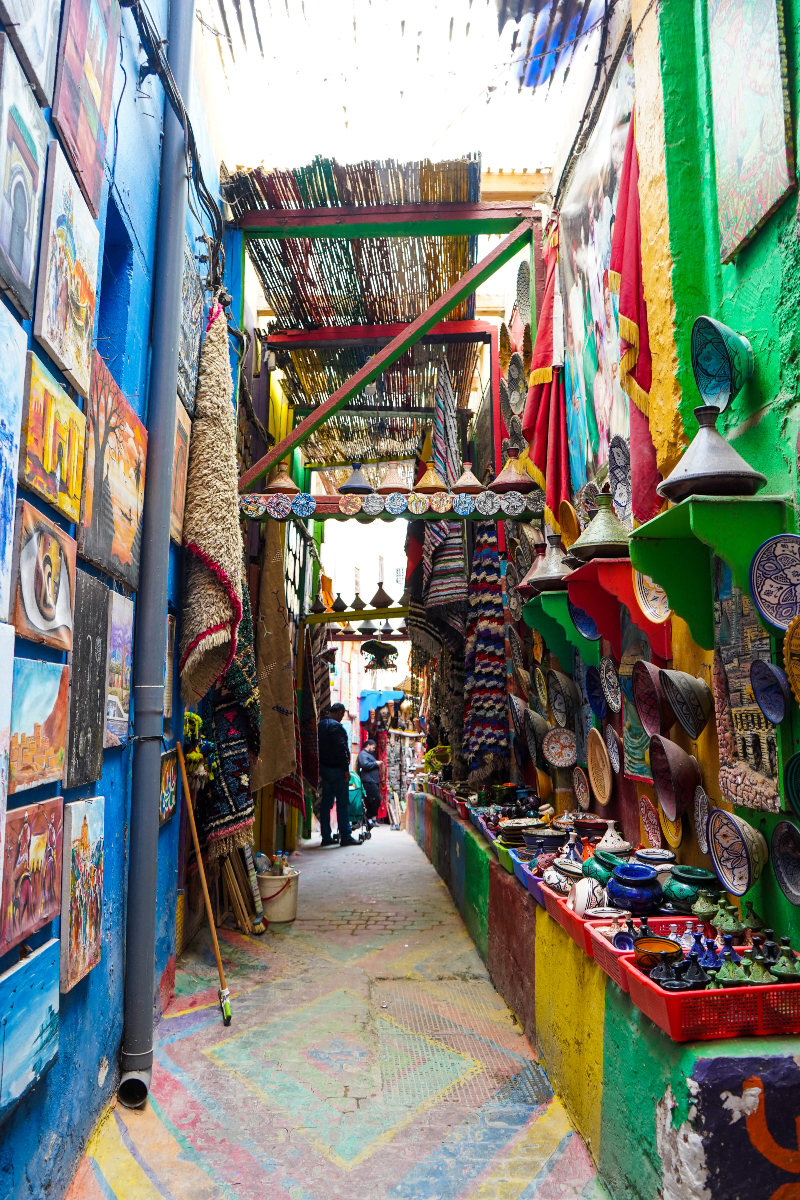 Medrasas are religious schools and the Medrasa Al-Attarine is located near the Al Quaraouiyine Mosque, the oldest university in the world. The  Medrasa Al-Attarine was ordered to be built by Marinid Sultan Ya’qub Abu Said Uthman II as an annex to Al-Quarauiyine and completed in 1325. 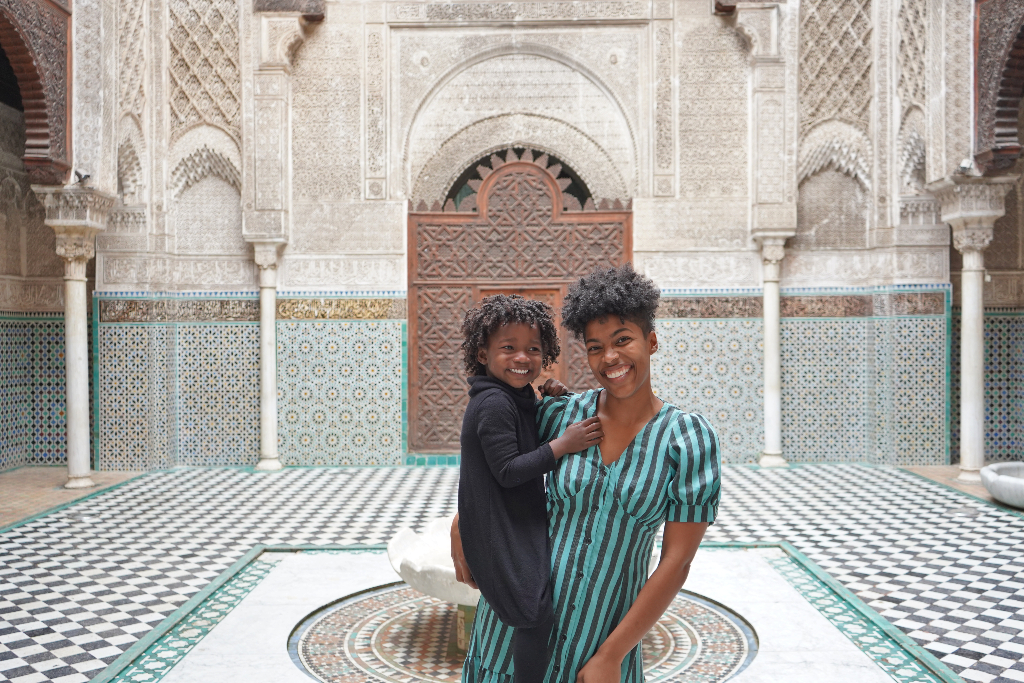 You may be interested in reading: tips for taking perfect vacation photos.

If you do nothing else during your stay make sure visiting a tannery is the one thing you do. There is a reason it’s on everyone’s things to do in Fes list. Tanneries are where leather is dyed and since cow urine and pigeon poop are key components in the process the smell can be upsetting to the stomach. Shop owners will give you mint to hold under your nose while you look out into the tannery to see the process. 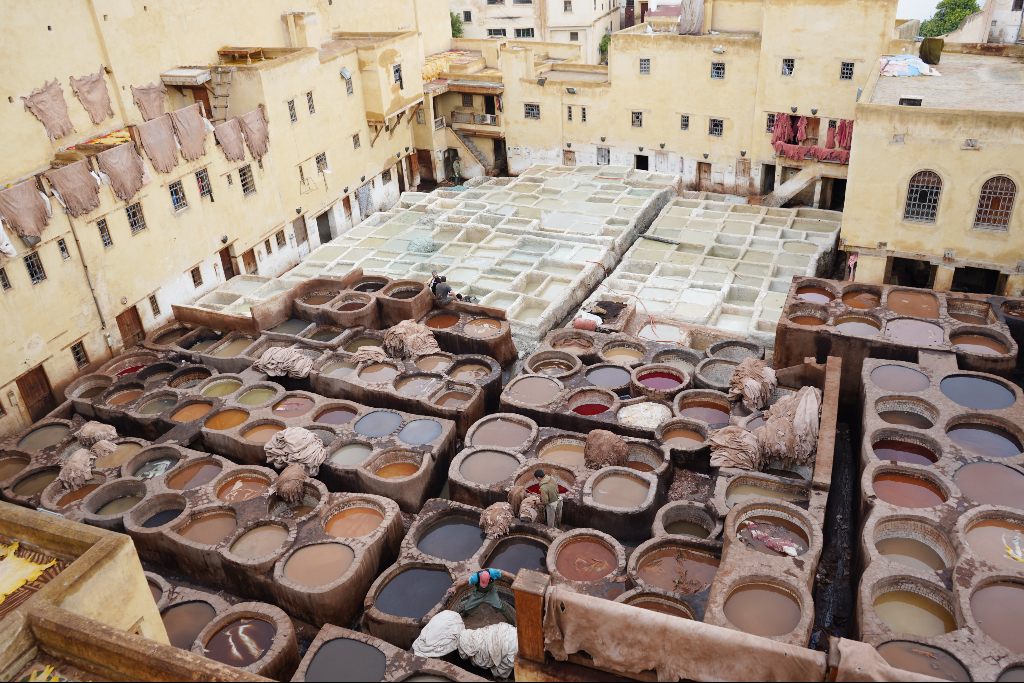 The mint wasn’t enough for me during my first visit in 2013 when I was traveling while pregnant. Thankfully this time I was able to endure the smell and really take in the process which is quite interesting. Chouara Tannery is the most popular one which makes sense as it’s been around since the 11th century. While there are tanneries in other parts of Morocco, the ones in Fes are most well known.

The Medersa Bou Inania is part of the Kairaounie University and was originally used to house theology students. It started to be built in 1350 by Sultan Abou el Hassan and took 7 years to be completed. It’s the only religious building in Fes that allows non-muslims to enter but still you can only visit the courtyard if you aren’t Muslim. It costs  20 dirham ($2) to enter. Like most places in Morocco the architecture is stunning! This private cultural day tour of Fes takes you through Morocco and its surviving empire, including Medersa Bouanania. 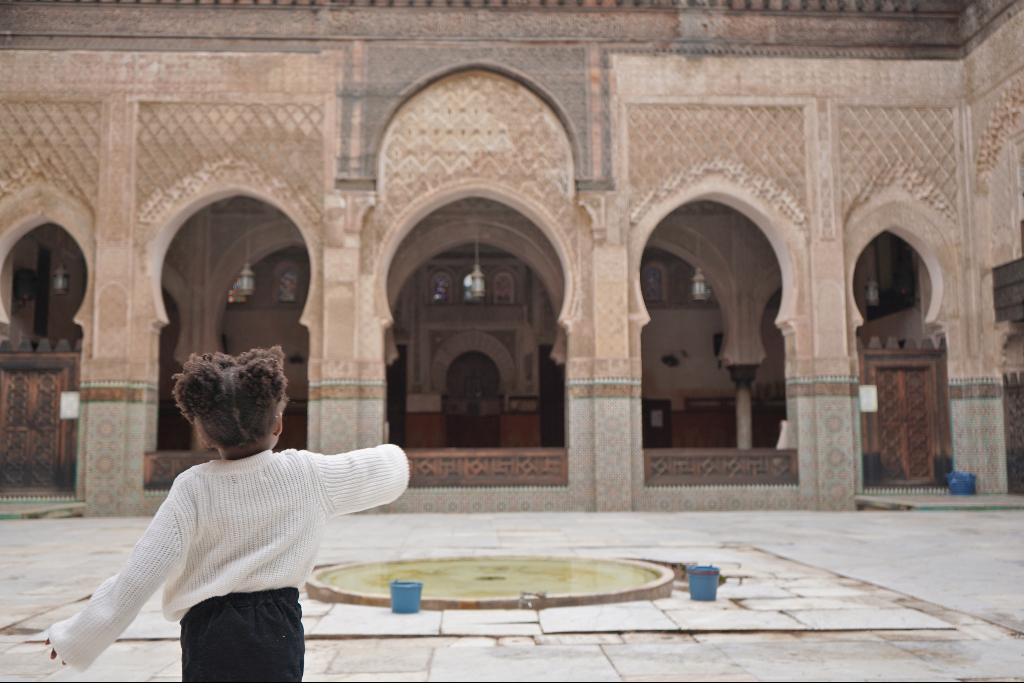 Looking for a guide to show you around Fez? We booked this walking tour on Airbnb Experiences to learn the history through a local.

Things to Do in Fes Outside the Medina

If you need some solitude from the hustle and bustle of exploring the medina head to Jnan Sbil Gardens. It’s a short 10 minute walk from Bab Boujloud (the blue gate). While it’s nowhere near as extravagant as Majorelle Gardens in Marrakech it does have a river, pond, fountains, and flowers. You can walk around or take a rest on one of the benches. 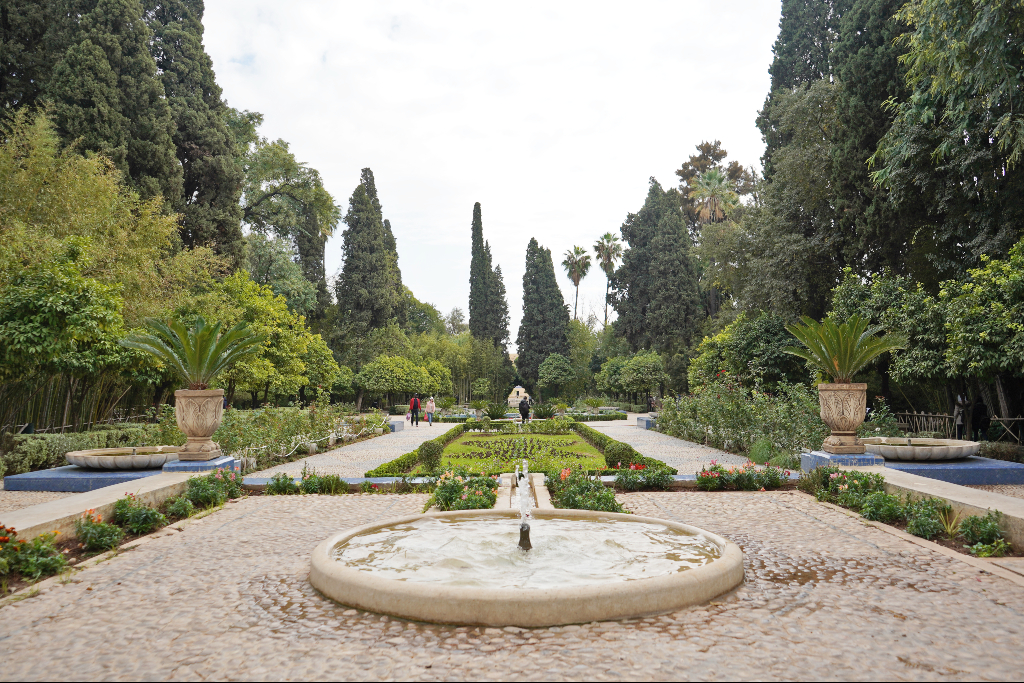 For the best views overlooking Fez we headed to Borj Nord. It’s a 16th century fortress but honestly it’s pretty ruined. Still it offers great views of the city. In addition to the views there is an Arms Museum here. It’s open Tuesday through Sunday from 9am-12pm and 2-6pm. The museum has a collection of weapons from all over the world including those used in the Battle of the Three Kings.

My favorite part of our time in Fes was taking a Moroccan Dance Class. I found it on Airbnb Experiences and it was taught in the home of a Moroccan dancer. She’s a stay at home mom to three kids and teaching this class allows her to continue to do so. The class was $27 for 90 minutes and after class she made tea and had home baked goods for us to enjoy together. You can book her class here. 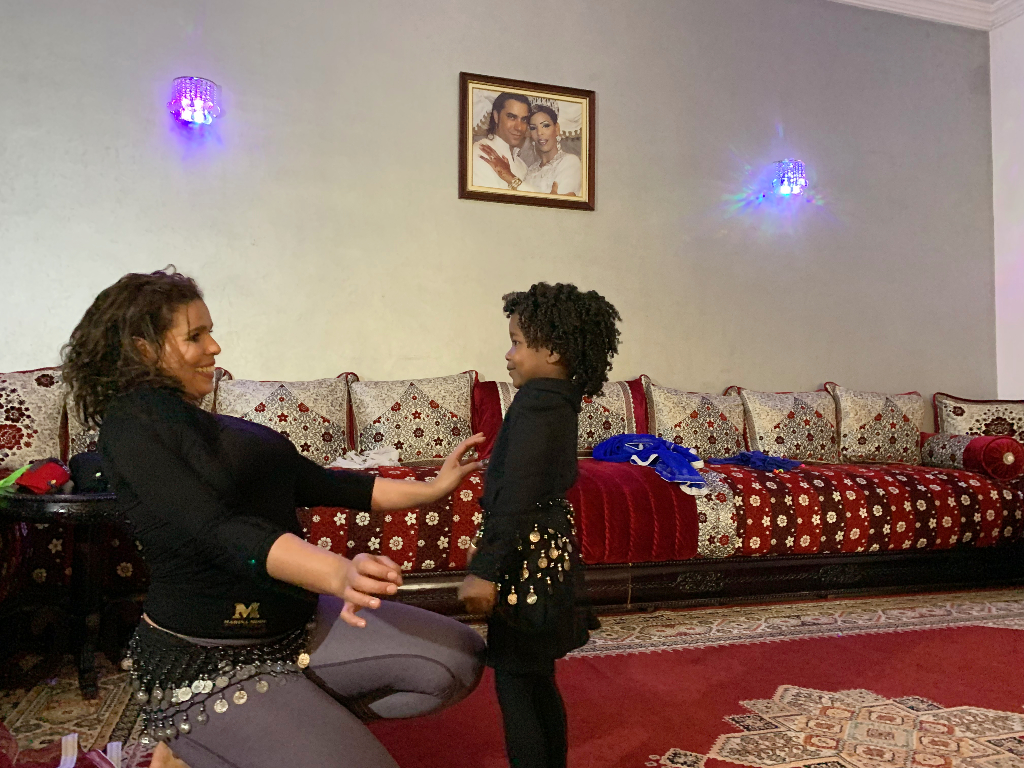 The Western entrance to Fes el Bali (Old City), the Bab Boujiloud is the iconic blue gate of Fes. While Bab Boujiloud is often referred to as The Blue Gate once you get to the other side look back and you’ll see it’s green. Green is the color of Islam! 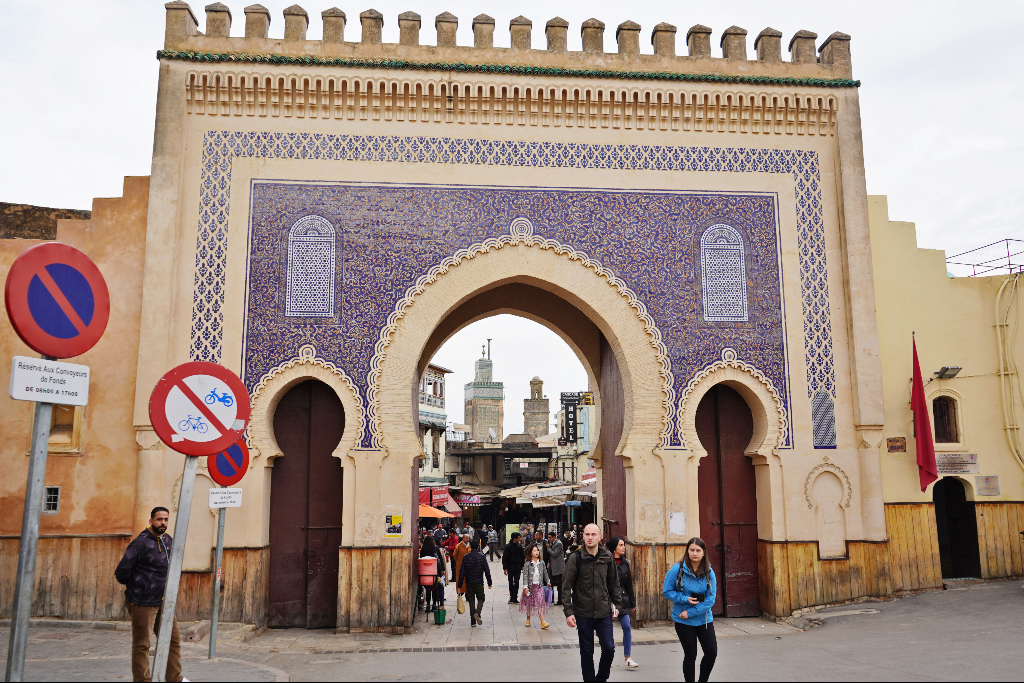 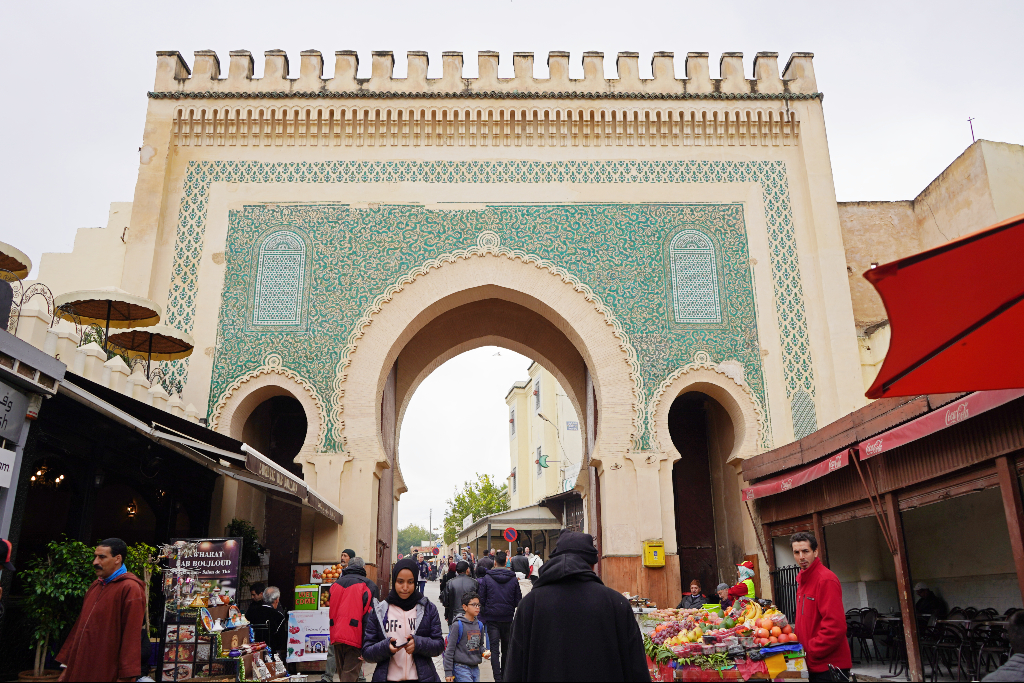 Where to Stay in Fes

After staying at Le Riad Yasmine in Marrakech and an Airbnb in Chefchaouen we were ready for the amenities of a hotel. We booked our three nights at the Fes Marriott Hotel Jnan Palace which was outside of the Medina unlike our other accommodations. It was a nice change of pace and plenty of space! Our room was nice, clean and had a balcony, check out the video of our room tour below. 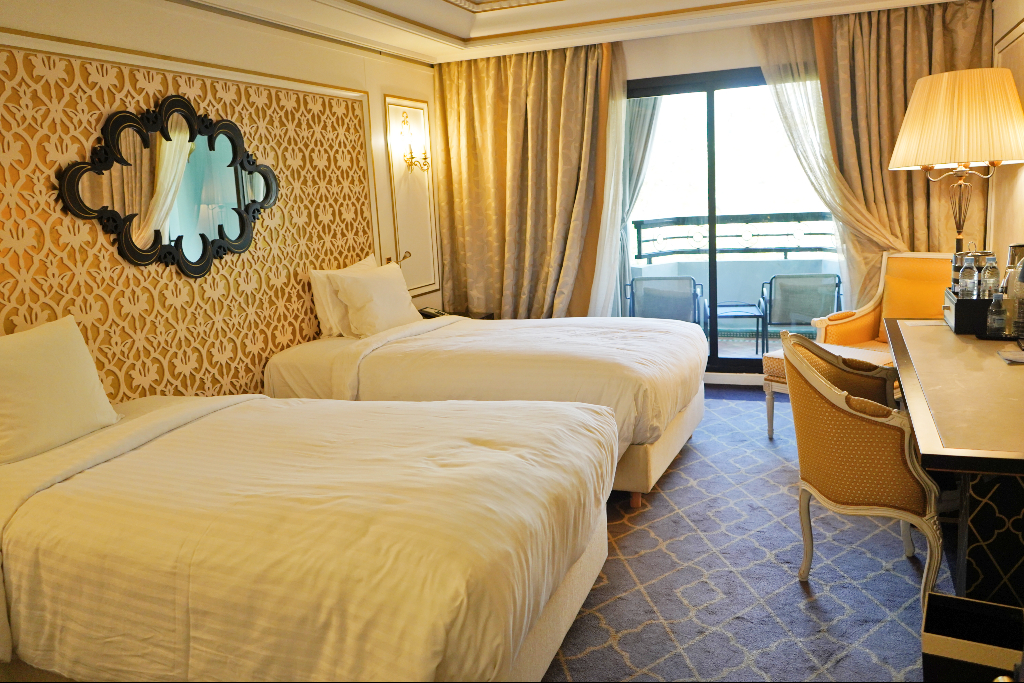 If you’re a Bonvoy member you’ll be able to use and/or collect points towards free future hotel stays at Marriott properties. We also have the Bonvoy Marriott Chase credit card so we got even more points and perks. This included receiving complimentary breakfast each morning, saving us $20 per person per day (sign up here for a special bonus). The buffet includes cold and hot foods like pancakes, waffles, bagels, fruit and an omelette station.

Besides the breakfast buffet in the Marriott Cafe there are four other places on site to dine. We loved Dolce Vita which serves Italian cuisine. It’s open for lunch and dinner and we ate there three times during our stay. Everything we had was delicious! 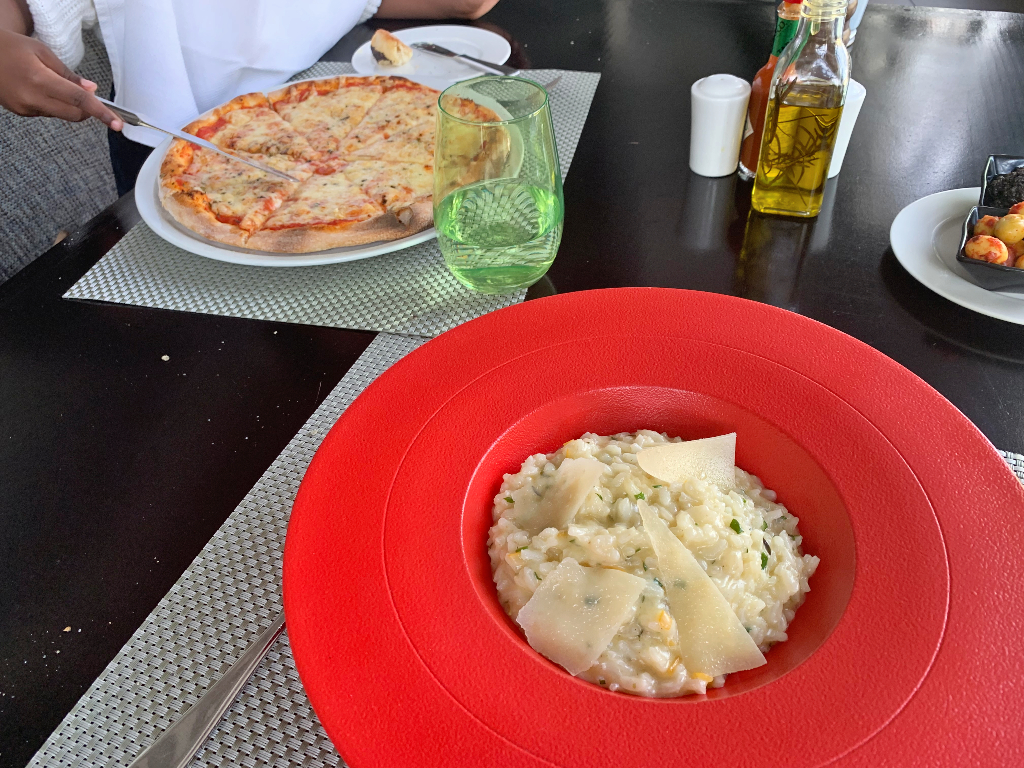 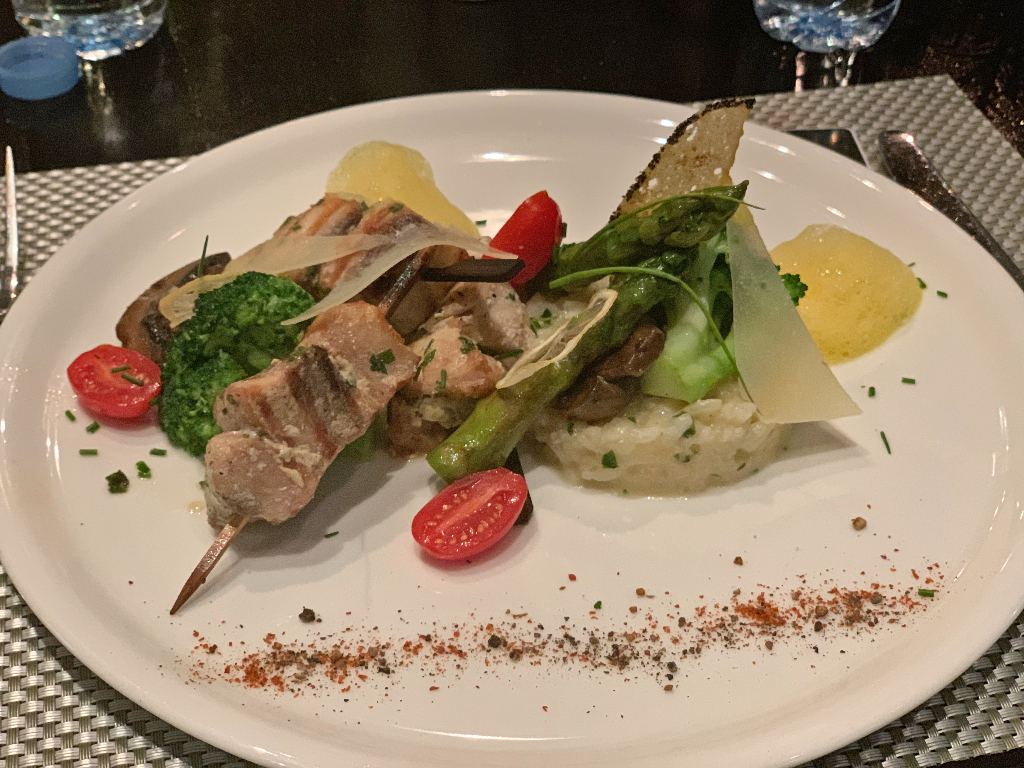 In addition to Dolce Vita there is another sit down restaurant, Mont Liban. They serve Lebanese and Moroccan food and are only open for dinner. We visited during the slow season so we were able to get a table without a reservation but during the high season reservations are required. During dinner there was a live band playing beautiful music throughout the evening.

There are also two casual dining areas, the Piano Bar and the Pool Bar & Grill. You can get mixed drinks, finger food and typical bar food at both. Just be aware smoking is allowed in the Piano Bar so if you need a snack and want to avoid the smell order your food to go. Besides the bars everyday we walked into the hotel we were offered the infamous Moroccan tea. The staff was so welcoming and accommodating, we couldn’t have asked for a better stay. 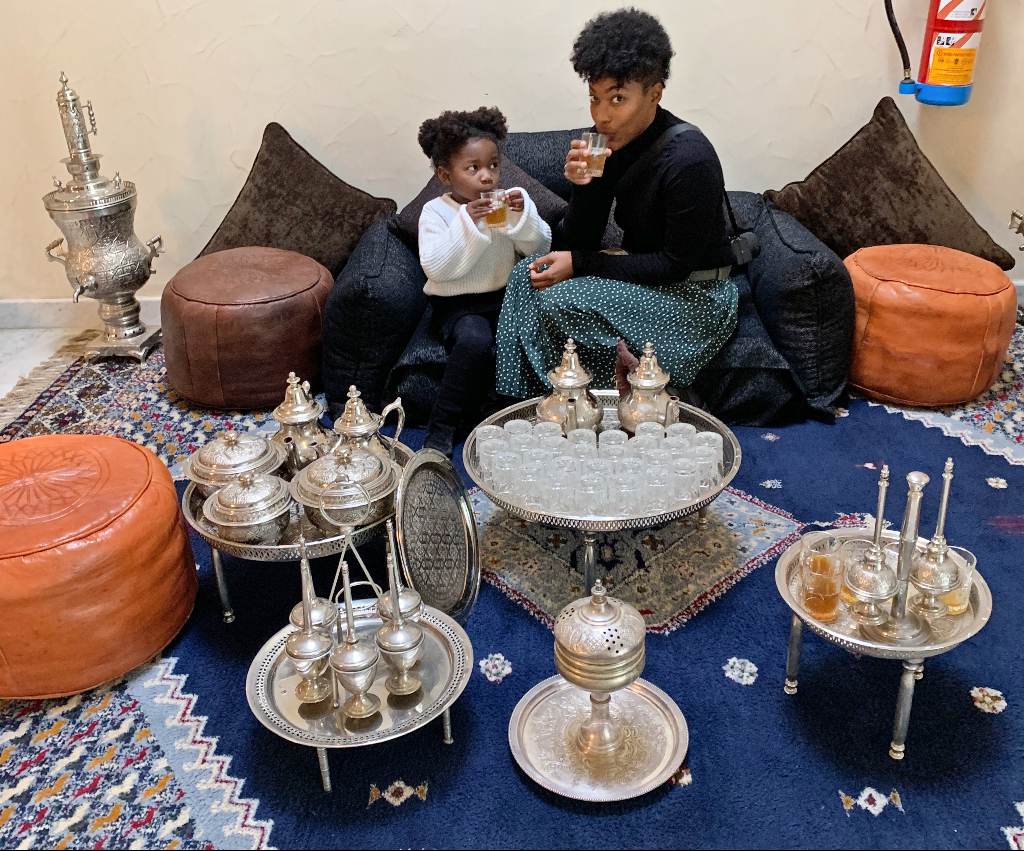 If you’re visiting during the summer months there is a pool on site you can enjoy. There is a gym and and a spa you can get traditional services and a hammam. The hotel is just a short drive to the Medina and cost 20 dirham ($2) in the small red taxis.

How to Get to Fes from Marrakech or Chefchaouen

Unlike Chefchaouen, Fez is one of the more easily accessible cities in Morocco. You can get here via plane, train or bus. Still there are only 8 airlines that service the Fes airport (FEZ), flying from only 33 destinations. This means if you’re coming from the US you will have a layover in another city before arriving in Fes. During our trip we actually arrived and departed from Fez by plane, bus, train and taxi!

We came to Fez from Marrakech by plane, a short 30 minute flight on Air Arabia Maroc. The pilot let my daughter sit in the cockpit before we took off and she was so excited. The flight cost me $77.42 for two tickets! The airport is small but you can exchange money and there are two restaurants to get food. Outside there are endless amounts of taxi drivers willing to take you to where you need to go, for us that was Chefchaouen. 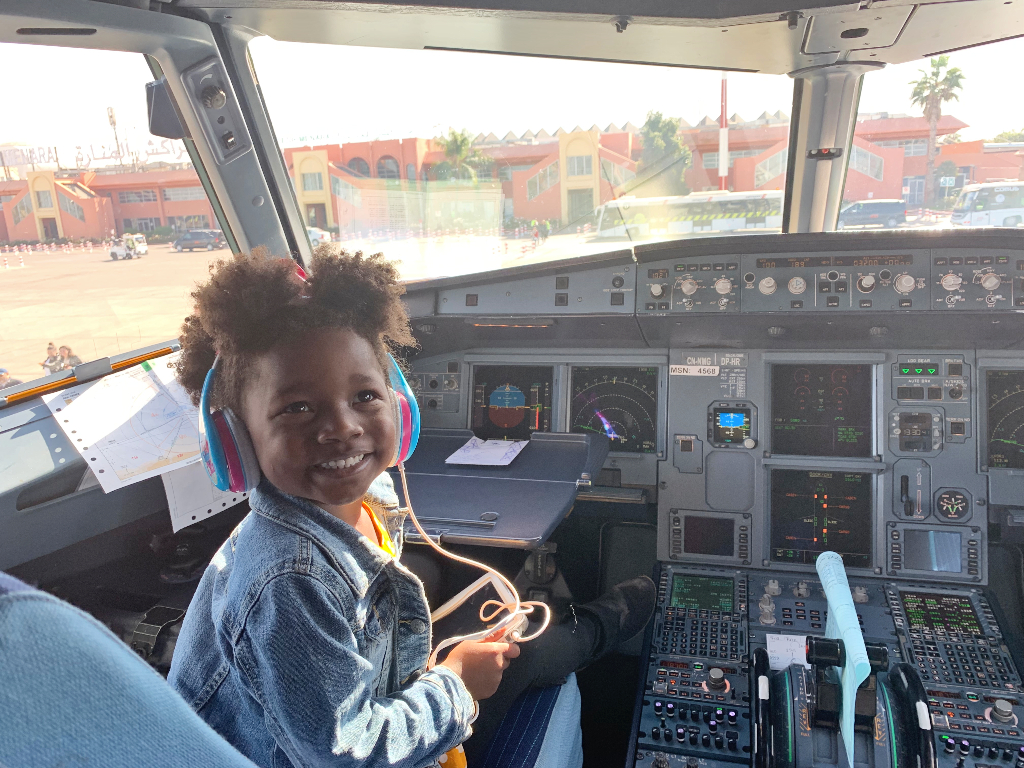 When returning to Fez from Chefchaouen we took the CTM bus. The ride was four hours and cost $7.50 per person along with an additional $1 per suitcase. The bus was very clean and made two short stops for bathroom breaks. At both stops there was a place to purchase snacks and drinks. 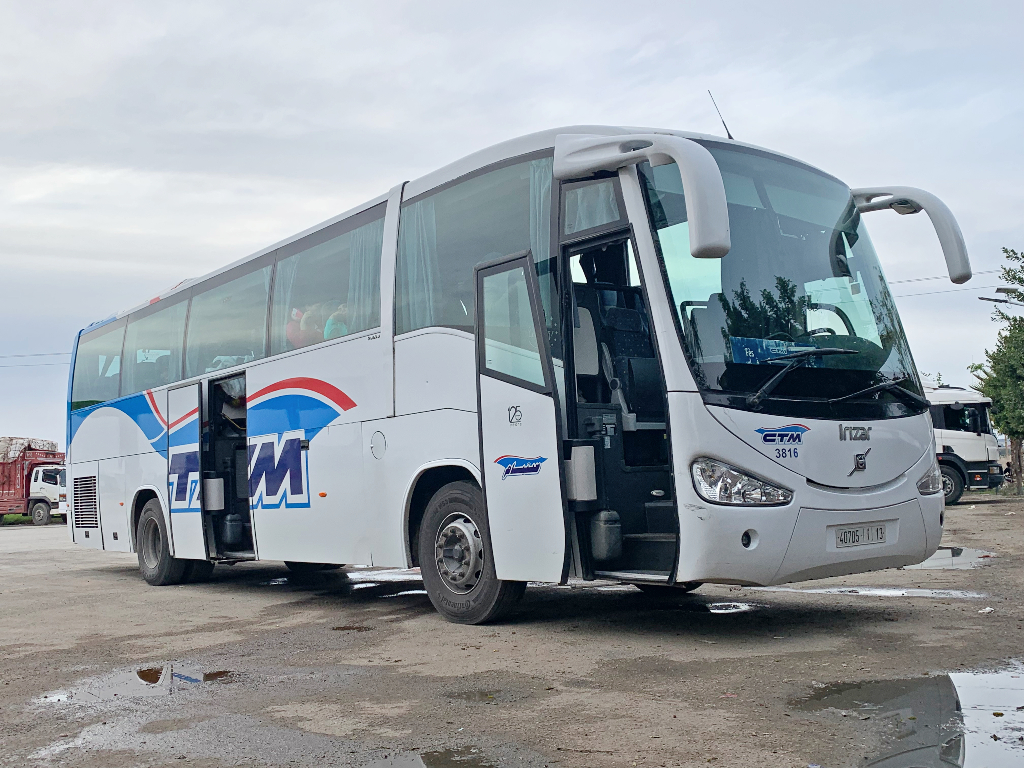 When we left Fez to return back to Marrakech we took the train, ONCF. There aren’t direct flights from Fez to Marrakech daily and the day we needed to leave there weren’t any. For the number of stops and layover length it just made more sense to get on one train and go straight to Marrakech. There are While there were multiple stops on the train, a 6 hour total ride, we didn’t have to get off at any time. For our two tickets the cost was $30, we bought them at the train station two days prior but you can purchase them online here. 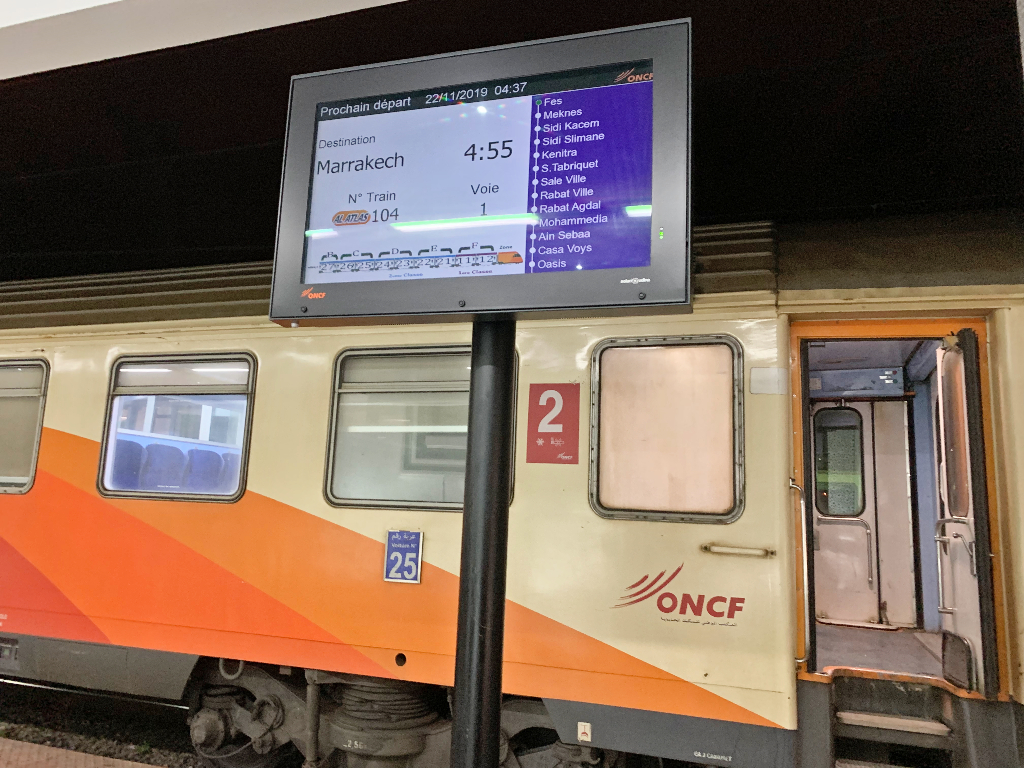 Be sure to book a first class ticket for assigned and comfortable seating. Each car is broken into little compartments of 6 seats. Someone walked down the car selling snacks and drinks but I didn’t see anywhere to make full meal purchases so pack something with you. 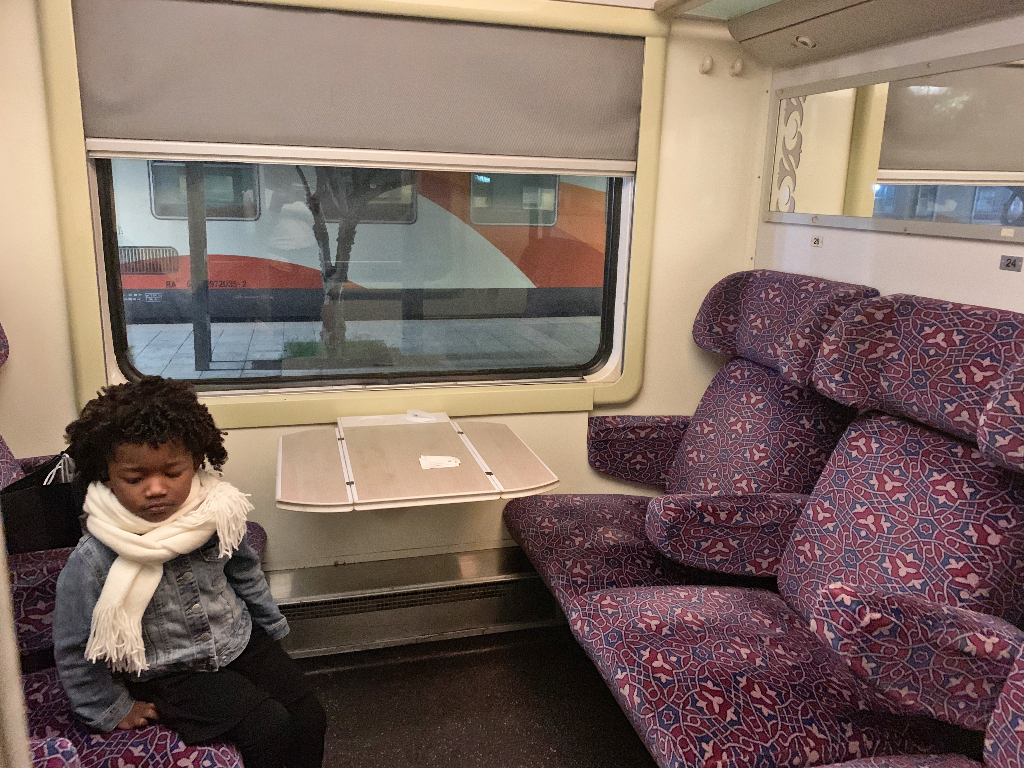 When we got to Marrakech we spent five days there (read that itinerary here). We had a great time in Fes and I hope our list of things to do in Fes helps you plan your own trip. If it does, please share this article to help others! 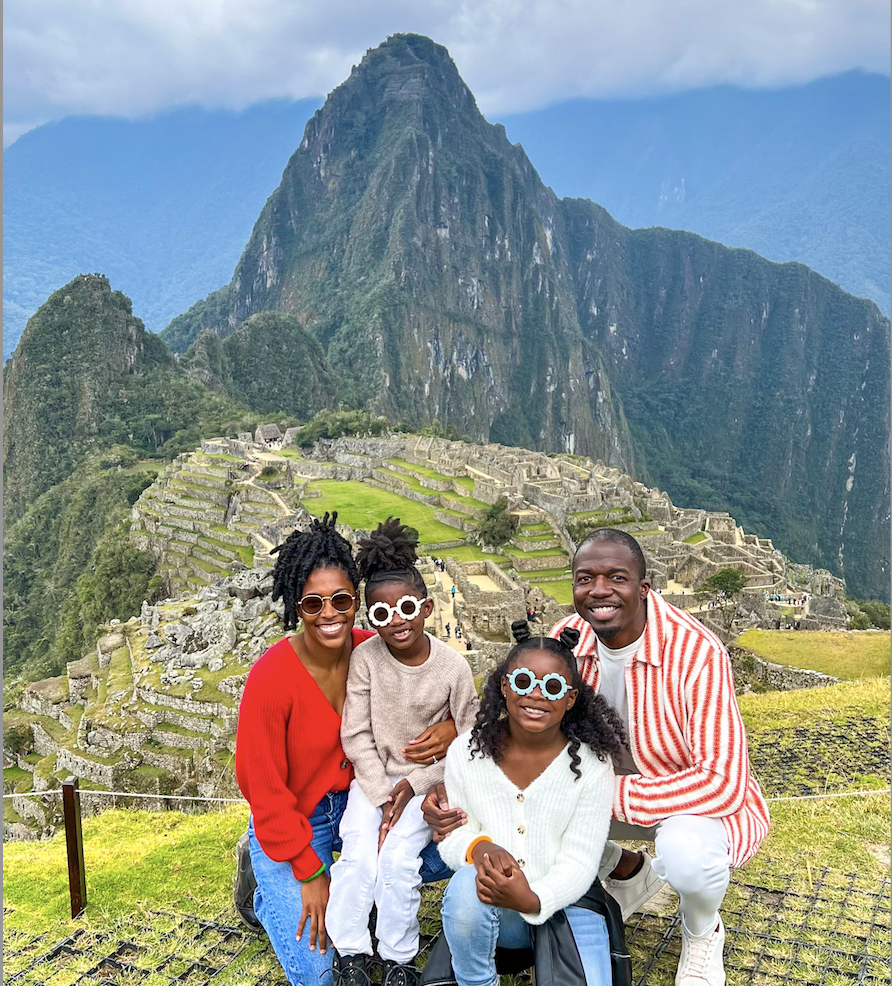